Just how much public transport service do people get in different parts of Melbourne? How can you visualise service provision across a city? Here is my attempt.

A measure of PT service provision

Some routes run high frequencies, some run over a long span of hours, some do both. Some routes have lots of short trips that don’t run the full length. How do you translate all this into something that is meaningful?

My preferred measure is simple: (one-direction) departures per stop or station per week. It reflects both span of hours and frequency of service (although it doesn’t differentiate between them). And by calculating this at the stop level, you account for trips that don’t run the full length of the route.

Below is a map for the Greater Melbourne area (to see the detail you will need to click to enlarge and then zoom-in further). 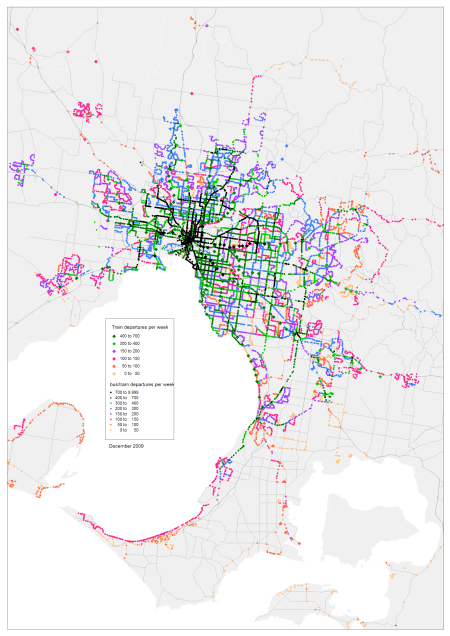 Limitations and qualifications on the data:

Things I need to mention:

This entry was posted on Saturday, March 20th, 2010 at 7:52 pm and is filed under Melbourne. You can follow any responses to this entry through the RSS 2.0 feed. You can leave a response, or trackback from your own site.