How multi-modal are public transport journeys to work in Australian cities?

In this post I’ll look at journeys to work from the 2011 census for the five larger Australian cities with multi-modal public transport networks. The results might not be quite what you expect.

Before looking at the data, I think it is important to think about the factors that might influence the degree of multi-modal public transport commuter trip-making, particularly with regard to radial trips towards city centres:

Journeys to work in city centres

So, what percentage of all journeys to work in city centres involve multiple public transport modes? (see note at the end of this post about estimation for 2001 figures) 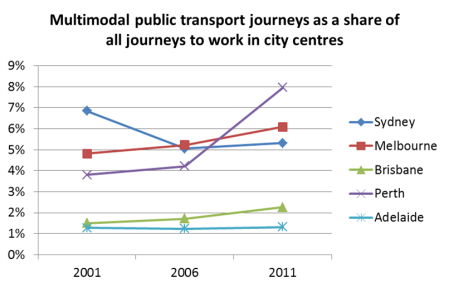 The vast majority of people who use public transport to access jobs in city centres only use one mode. Given that most city centre workers don’t actually live all that far from the CBD, it’s not too surprising as an overall pattern.

Perth is the stand-out for highest multi-modal public transport travel, and largest increase in this type of journey between 2006 and 2011. A few things might explain this:

Melbourne comes in second (if Southbank and Docklands were included, the 2011 figure would be 10.3%). Interestingly, there were more train+bus journeys to the city centre, than train+tram journeys.

Sydney is third, despite having four modes of public transport. This perhaps reflects the lack of a fully integrated fare system (ie multi-modal tickets are usually more expensive that single-mode tickets) and the fact many bus routes run parallel to train lines (and it is usually cheaper to stay on the bus rather than transfer onto the train). It’s not clear to me why Sydney would have had a reduction in multi-modality between 2001 and 2006.

Brisbane had a much lower multi-modal share, probably related to a high bus mode share, the presence of busways providing efficient single-mode (often single-seat) travel for a large number of commuters to the central city, many bus routes running parallel to train lines, and the only relatively recent introduction of full multi-modal fare integration in 2004-05.

Adelaide also rates lowly and has been in decline, perhaps relating to the low-frequency train system (that is now receiving an upgrade including electrification). The extension of the Adelaide tram route from Victoria Square to the Entertainment Centre may have reduced the need for existing tram passengers to transfer, but on the other hand may be helping to circulate people arriving in the city on buses and trains.

The following chart shows how multi-modality compares for public transport journeys to work in city centres and elsewhere:

Here are the trends over time for multi-modality of public transport journeys to workplaces outside city centres. It shows increases in Perth and Brisbane, declines in Adelaide and Sydney, and little recent change in Melbourne: 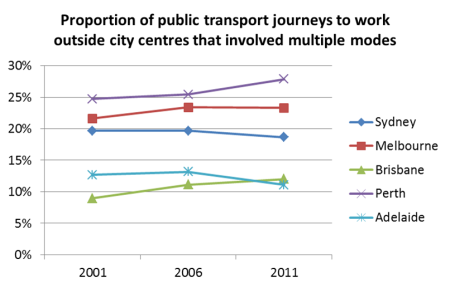 Perhaps the increase in Brisbane might be attributed to full multi-modal fare integration introduced in 2004/05, providing free transfers between modes. The increase in Perth is no doubt related to the Mandurah rail line opening.

So is the city centre the main destination for multi-modal public transport journeys to work?

In the larger cities the answer is no. In Adelaide and Perth – where over 60% of PT journeys to work are to the CBD – only around half of the multi-modal PT trips are to the city centre.

Finally, I’ve had a look at the home origins for multi-modal public transport journeys to work for Melbourne and Perth in 2011. Click to enlarge maps, and note the colour scale is for mode shares 1 to 10%. 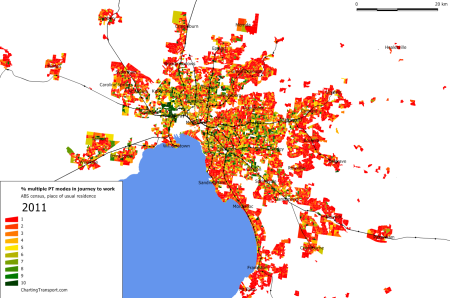 In Melbourne the highest concentrations are north of Footscray, where several frequent tram and bus routes feed Footscray station. There are also concentrations in the middle-eastern and middle-northern suburbs, particularly around SmartBus routes.

In Perth the highest concentrations are in the northern and southern suburbs, where frequent bus routes connect people’s homes to high-speed train services in peak periods.

My next post will continue the multi-modal theme and look at what modes were used in conjunction with trains in the journey to work.

Available data for 2001 only shows mode share in an aggregated summary, including figures for “train and two other modes” and “bus and two other modes”. Not all of these journeys involved multiple public transport modes, and I don’t know exactly how many did.

The result is that around 20% of the total 2001 multi-modal PT journeys are estimated.

I also checked these percentages in the 2011 data, and they were very similar to 2006. For example, 89% of journeys that could be described as “train and two other modes” in 2006 for Melbourne involved multiple PT modes, and in 2011 that figure was 88%. The similarities were weaker for “bus and two other modes”, but the numbers for this category were very small (less than 65 journeys in all cities except Sydney at 145).

This entry was posted on Monday, June 17th, 2013 at 10:17 pm and is filed under Australian Cities, Mode share, Multi-modal. You can follow any responses to this entry through the RSS 2.0 feed. You can leave a response, or trackback from your own site.

4 Responses to How multi-modal are public transport journeys to work in Australian cities?