This post is drifting a little away from transport, but I hope you will find this interesting…

How has the spatial distribution of socio-economic advantage and disadvantage changed over time in Melbourne? (oh, and Geelong too)

The animated maps below are fascinating, but of course there’s lots of important caveats regarding the data.

Since 1986, the Australian Bureau of Statistics (ABS) has calculated Socio-Economic Indexes For Areas (SEIFA) based on five-yearly census data. These include indexes of relative socio-economic disadvantage (IRSD), and – since 2001 – an index of relative socio-economic advantage and disadvantage (IRSAD). For 2006 and 2011, SEIFA was explicitly designed to measure “people’s access to material and social resources, and their ability to participate in society” (with similar intent for prior years).

This post looks at the spatial changes over time in these index values. I must be upfront: ABS explicitly cautions this type of analysis. This is mostly because the component census variables that make up SEIFA scores and their respective weightings vary between each census, but also because statistical area boundaries change, the number of areas has increased, and indexes were calculated on usual residents from 2006 onwards (as opposed to people present on census night for 2001 and earlier). ABS also notes that middle range scores are very similar, so time-series analysis should focus more on the top and bottom ends of the spectrum. More discussion on this issue is available from ABS and .id consulting.

However, I’m going ahead noting the above (as readers also should!), on the following basis:

This index has been available from 1986 onwards.

More significant changes in the make up of this index in recent years include:

Click on this map to enlarge and see an animation of IRSD percentile values for the years 1986 to 2011.

You can see some quite dramatic changes over time. Two big trends of note are:

Changes in Index of Relative Socio-economic Advantage and Disadvantage (IRSAD)

This index was first calculated in 2001 and aims to also measure advantage, not just factors that suggest disadvantage. In 2011 it included all but one of the IRSD variables, plus a number that describe levels of advantage (eg high income, higher education, occupations such as managers and professionals, high rent or mortgage payments, spare bedrooms).

The component variables of IRSAD have changed in line with the changes to IRSD, plus some other variables:

An aside: SEIFA associates higher car ownership with advantage, but I suspect some inner-city types might consider not needing to own a car an advantage.

Here is an animation of the Index of Relative Socio-economic Advantage and Disadvantage for years 2001 to 2011.  Again, click to enlarge and see the animation.

The changes between 2001 and 2011 are much less dramatic, probably because of the shorter time span. Some observations:

What’s also interesting to see is some socio-economic fault lines in Melbourne, such as:

How different are IRSAD and IRSD values?

For those who are interested in the correlation between the two, here’s a scatter plot for both 2006 and 2011 data comparing the two index values (as percentile ranks) for all CDs and SA1s (respectively) in Victoria: 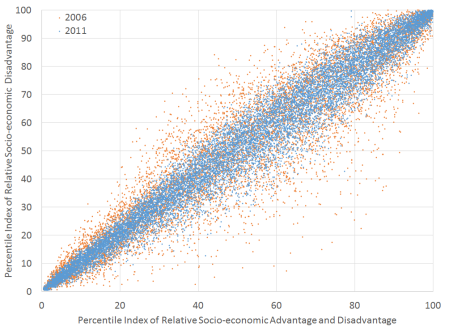 I’m sure others could spot other interesting patterns, and/or offer explanations for the changes over time (comments welcome).