[updated December 2012 with more Canberra and Hobart data, and removing ‘method of travel not stated’ from all mode share calculations]

The ABS has just released census data for the 2011 journey to work (amongst other things). This post takes a city-level view of mode share trends.

The following chart shows the public transport share for journeys to work for people within Statistical Divisions (up to 2006) and Greater Capital City Statistical Areas (for 2011) for each of the Australian major capital cities. 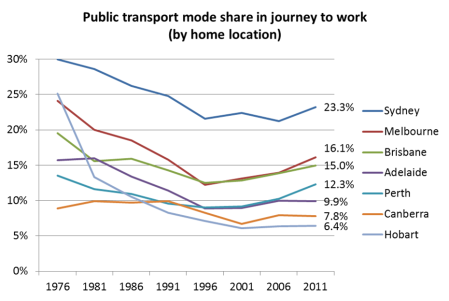 You can see 2011 increases in public transport more share in all cities except Adelaide, Hobart and Canberra. Melbourne grew by 2.2%, Perth by 2.1%, Sydney by 2.0%, Brisbane by 1.1% while Adelaide, Canberra and Hobart dropped by 0.1%.

But there are limitations of this data:

The limitations in counting of tram and ferry trips can be overcome by measuring mode share by workplace location, although I can only get such data for 2001, 2006 and 2011:

These figures are all higher because they include people travelling to work in the metropolitan areas from outside (where PT might have a higher mode share via rail networks for example) and they count all journeys involving ferry and tram. Between 2006 and 2011, Melbourne grew the fastest – by 2.4%, Sydney and Perth were up 2.0%, Brisbane up 1.2% and very little change in Adelaide, Canberra and Hobart.

Canberra is the stand-out city, owing to a good network of off-road bicycle paths through the city. But Melbourne has shown the fastest increase, going from 1.o% in 2001 to 1.6% in 2011.

Adelaide, Perth, Brisbane and Melbourne had a significant drop between 1991 and 1996, but this did not occur in Hobart, Canberra or Sydney.

Canberra, Melbourne and Sydney have shown the most growth in recent times. Adelaide and Hobart unfortunately went backwards in 2011. I’m not sure why Adelaide dropped so much, maybe it was a product of weather on the two census days?

Here’s another view that includes journeys with bicycle and other modes (by work location, not home location):

Perth and Canberra had the largest growth in journeys involving cycling and other modes. 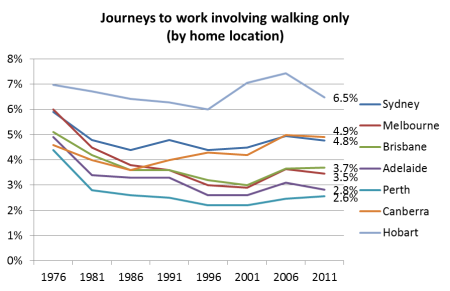 Walking only rose in all cities 2001 to 2006, but then fell in most cities between 2006 and 2011 (Perth and Brisbane the exceptions). Perhaps surprisingly, Hobart had a higher rates of walking to work than all other cities.

The following chart shows the proportion of journeys to work made by car only (either as driver or passenger):

You can see car mode share peaked in 1996 in all cities except Canberra where it peaked in 2001, and Hobart where the 2011 result was just under the 1996 result.

Travel as a vehicle passenger has declined in all cities, suggesting we are doing a lot less car pooling and commuter vehicle occupancy is continuing to decline in line with increasing car ownership. Curiously Hobart and Canberra topped the cities for vehicle passenger mode share.

Because of the issue of under-counting of tram and ferry data for place of enumeration, I’ve constructed the following chart using place of work and a “main mode” summary:

I assigned a ‘main mode’ based on a hierarchy as follows:

In future posts I plan to look at the change in spatial distribution of journey to work mode share (by home and work location).

I’d like to acknowledge Dr John Stone for assistance with historical journey to work data.