Car and transit use per capita in Australian cities (Peak Car)

[post updated in January 2016 with data from the 2015 BITRE Yearbook. For some more recent data see this post published in December 2018. First published January 2010]

Thanks to the Bureau of Infrastructure, Transport and Regional Economics’ Australian Infrastructure Statistics Yearbook 2015, a great set of time series data is available on transport behaviour. This post looks at trends in private and public transport use in Australian cities up until 2013-14.

The first chart shows car passenger kms per capita peaked in 2004 for all cities and has been mostly in decline since then (with the possible exception of Adelaide in recent years).

This is clear evidence of “peak car” use per capita in Australian cities.

The underlying figures show relatively little growth in total car passenger kms in most cities in the ten years since 2003-04: 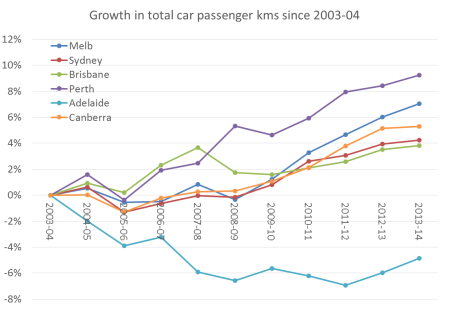 Perth has shown the greatest increase in total car passenger kms despite the reduced car use per capita, presumably mostly reflecting strong population growth. Canberra, Sydney and Melbourne show a flat-lining in car passenger kms between 2004 and 2009 (a period of time that is becoming very familiar on this blog). I’m not sure why Adelaide has seen declining car passenger kms (it’s population did grow over this period by 10%).

Does this mean we are travelling less? The following chart shows estimated motorised passenger kms per capita, and yes in all cities there was a peak in 2003-04 followed mostly by declines. This might be people taking shorter trips, people taker fewer trips, and/or people substituting motorised transport with non-motorised transport.

There is another story in the data. Mass transit passenger kms per capita rose significantly in Melbourne and Perth between 2005 and 2011:

However, more recently there have been slight declines in Brisbane, Perth, Adelaide, and Canberra.

Sydney shows up with many more mass transit kms per capita than any other city (68% of which is on rail). While I am not sure exactly how BITRE sourced their train patronage data for “Sydney”, my experience is that patronage data is only readily available for a very wide definition of Sydney’s railways including lines beyond the Sydney Statistical Division including Newcastle, Nowra, and the Hunter Valley.

You can also see a spike in mass transit use in Sydney in 2000/01 – the year containing the Olympic Games.

Melbourne and Perth are the stand outs for mass transit mode shift based on these figures, particularly in the years leading up to 2009. Adelaide, Sydney and Brisbane also saw mode shift between around 2004 and 2009, but Adelaide and Brisbane have gone backwards since then.

Note there are other ways to more directly measure transport mode share – primarily household travel surveys, covered in another post.

Finally, here is a stark comparison of total car and mass transit passenger kilometre growth since 2003-04 (with population growth included for reference):

Business as usual no longer

In the frequently cited BITRE 2007 report on congestion costs, they made a “business as usual” assumption that mode shares will not change (ref page 8) and that car use per capita would increase (ref page 47), and then forecast that avoidable congestion costs in Australia will more than double between 2005 and 2020. The latest BITRE evidence is that mode shares are not business as usual in most cities and that car use per capita is decreasing. See another post reviewing the forecasts of the costs of congestion.

An updated 2015 BITRE report on the costs of congestion looks at the issues of per capita vehicle user into the future in a bit more detail, including acknowledging researchers highlighting peak car.

Their new high case scenario assumes the recent downturn in per capita vehicle use is essentially all GFC related (and has persisted for 10 years), and that things will now bounce back to old patterns (and grow even faster than the 2007 forecast). Their medium case also assumes a reversal of trend, but that we’ll only return to the previous peak level by 2030, and a low case continues the current trend.

The 2007 forecast was not only trending in the wrong direction, their starting assumption about vehicle km per capita for 2007 was well above the (revised) estimated actual.

See also a recent piece on this subject by Professor Peter Newman in The Conversation.

This entry was posted on Friday, January 8th, 2010 at 8:55 pm and is filed under Australian Cities, Melbourne, Mode shift, Road Traffic. You can follow any responses to this entry through the RSS 2.0 feed. You can leave a response, or trackback from your own site.