What sorts of people use public transport? (part one)

On this blog I’ve previously had a good look at public transport mode share by where people live and where they work, and I did some profiling for Melbourne CBD commuters by age, gender, income, profession.

This post will focus on what personal circumstances are associated with higher and lower public transport use, and possibly why (although of course correlation often doesn’t mean causation). There’s a lot that is as you might expect, but also a few hunches confirmed and possibly some surprises (particularly in part two).

This post (part one) looks at geography, motor vehicle ownership, and driver’s license ownership. The second part will look at other personal circumstances.

Most of the analysis in this post comes from the Victorian Integrated Survey of Transport and Activity (VISTA), using the 2007-08 and 2009-10 datasets combined. The survey covers Melbourne Statistical Division (MSD), Geelong, Bendigo, Ballarat, Shepparton and the Latrobe Valley (that is, the capital and major regional cities in Victoria, Australia). The combined dataset includes some 85,824 people in 33,526 households who recorded their travel for one calendar day each.

When I measure public transport use, I am measuring whether a person used any public transport on their nominated travel survey day (the survey covered every day of the year). See here for a map showing the geographic breakdown of Melbourne into city, inner, middle and outer.

I must say thanks to the Victorian Department of Transport for making this data available for analysis at no cost.

Public transport use by geography

Firstly as a reference, here is what public transport use looks like spatially across Melbourne and Geelong. Sample sizes with Statistical Local Areas (SLAs) range from around 200 to 1300 people in Melbourne, so the margin of error will be up to around +/-7% in some areas (including a few of the outer suburban areas). 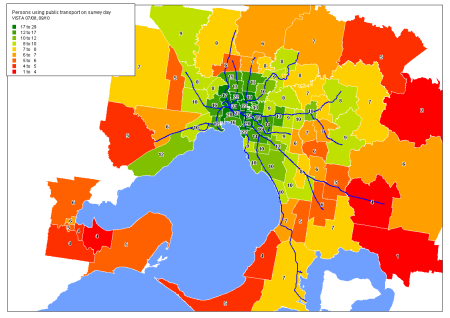 The following chart shows public transport use also had a lot to do with whether the person travels to/from the City of Melbourne on their survey day: 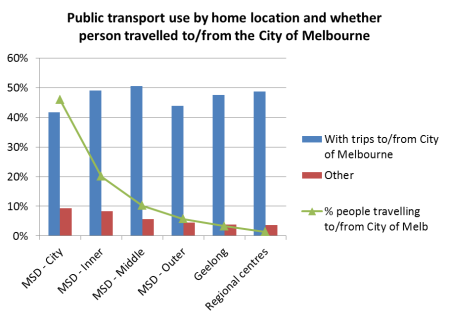 The green line indicates the proportion of all persons who travelled to/from the City of Melbourne on their survey day, which decreases with distance from the city. 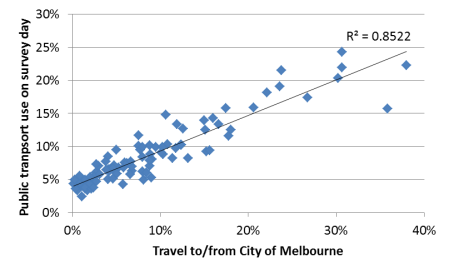 That’s a strong relationship. And the biggest outlier at {36% travel to/from Melbourne, 16% public transport use} is Port Phillip – West, which is just on the border of the City of Melbourne where walking would be a significant access mode.

Has it got anything to do with how close you live to a train station? I’ll just look at Melbourne and exclude the inner city area where trains are probably less important because of the plethora of trams and ease of active transport.

Proximity to train stations has an impact, but perhaps not by as much as you might expect.

Overall people living closer to train stations were slightly more likely to travel to/from the City of Melbourne, and if they did, they were a little more likely to use public transport.

This result is consistent with the 2006 journey to work patterns.

If you don’t own a motor vehicle, you’re going to need to some help getting around, particularly for longer distance travel.

In fact here is a map showing the percentage of people living in households with saturated car ownership around Melbourne and Geelong according to VISTA (again, margin of error is up to around 7%). Click to enlarge.

You can see very high rates of saturation in the fringe areas of Melbourne, and much lower rates in the inner city.

A more detailed view of car ownership is possible with census data. The following map shows the ratio of household motor vehicles to 100 people aged 20-74 in each census collector district in 2006 (note: I have had to assume “4+” cars averages to 4.2, and no response implies zero cars). The red areas have saturated car ownership as a district (probably closely correlated with households with saturated car ownership).

The census figures show a slightly different distribution but should be more accurate (being a census not a survey). Suburban areas with lower car ownership were generally those that are less well-off (and the large green areas on the western fringe of Melbourne are actually mostly prisoners, who tend not to own cars).

It will come as no surprise that there was a pretty strong relationship between motor vehicle ownership and public transport use:

And here is a scatter plot of saturated car ownership and PT use by SLA (removing SLAs with less than 200 people surveyed): 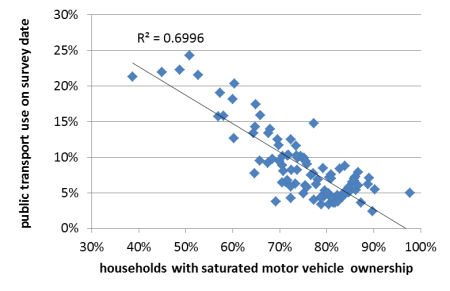 That’s a fairly strong relationship (the r-squared is higher still (0.87) at the LGA level).

Trends in car ownership are examined in another post.

It’s not much good having a motor vehicle to yourself if you are not licensed to drive it. In the VISTA sample, the driver’s license ownership rate peaks for people aged 40-54, and drops off more considerably after 85 years of age. Interestingly, 3.5% of people in the sample had their learner permit.

So are there heaps of older people out there without a driver’s license?

Not especially. It almost looks as if many people die in possession of a driver’s license (hard to be sure though).

(note: the chart averages the population in each category over the two VISTA surveys)

In part two we will see the rates of public transport use by age.

Here’s a map showing the percentage of surveyed people aged 20-89 who owned a probationary or full license (click to enlarge). 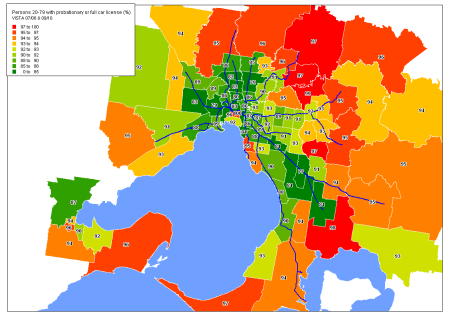 Similar to motor vehicle ownership, driver’s license ownership was highest in the outer areas of Melbourne, but still quite high in the inner city (please ignore the CBD and Southbank/Docklands figures of 100% and 96% as the sample sizes are too small).

And it will be no surprise that people with a full driver’s license were least likely to use public transport:

What you might not have expected is for people with a learner permit to be the most likely to have used public transport, even more than people with no licence at all. They are mostly younger people and you will see their rates of public transport in part two of this series.

Here’s a scatter plot of driver’s license ownership and public transport use by SLA: 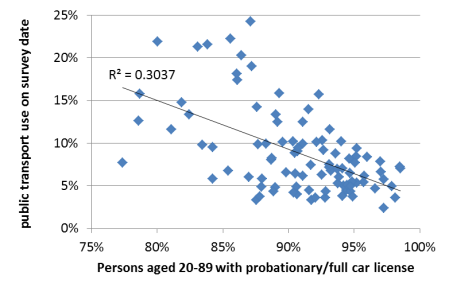 The relationship is much weaker than for saturated car ownership.

Click here for some interesting research about why young people are driving less.

How do motor vehicle ownership and driver’s license ownership interplay?

In the following chart I have used “independent license” as shorthand for probationary or full license.

These three factors seem to be the strongest indicators of public transport use. So what do they look like together?

From this chart we can see:

Is driver’s license ownership still a driver? Unfortunately I can only sensibly disaggregate further for people who didn’t travel to/from the City of Melbourne. The following chart looks at motor vehicle and license ownership groupings with a sample size of 200 or more for different geographies.

Okay, so those findings probably won’t shatter your understanding of the world, but I always find it interesting to test whether your hunches are true.

In part two of this series, I’ll look at patterns across age, gender, income, employment status and household type. There are perhaps a few more surprises in those results.

This entry was posted on Friday, June 15th, 2012 at 9:53 pm and is filed under Car ownership, Melbourne, Mode share. You can follow any responses to this entry through the RSS 2.0 feed. You can leave a response, or trackback from your own site.

3 Responses to What sorts of people use public transport? (part one)