Obviously not a new topic, but in this post I hope to at least illuminate the state of play in Melbourne (as per the 2006 census).

The Australian Census provides very detailed data on car ownership to a high resolution. The data includes the number of 0, 1, 2, 3 and 4 or more car households in each Census Collection District (which average around 225 dwellings). Most spatial representations of car ownership show the number of households with 0,1,2,3, or 4 or more cars. This is fine, except it ignores household size. Single occupant households are unlikely to have 3 cars, while large family households with grown up children are more likely to have 4 cars.

So I have looked at the data differently in two ways:

So the calculations are not an exact science, but give a pretty good idea of the car ownership rates for different areas. It also allows me to show car ownership rates on a single map, rather than the need for multiple maps. In the maps below I have only shown urban areas that come within a minimum urban residential density, so the boundaries between urban and regional areas are clearer.

Superimposed on the map are high quality public transport routes that existed in Melbourne in 2006. I’ve used all train lines (stations are marked), all tram routes, and selected bus routes with “high” service levels – reasonable frequency and long span (at most a 16 minute headway on weekdays inter-peak). It’s hard to define a perfect threshold for bus routes as some have good frequency but poor span of hours in 2006. Again not a perfect science.

Here are the maps for greater Melbourne and inner Melbourne (click on them for higher resolution – you may need to click again to zoom in). 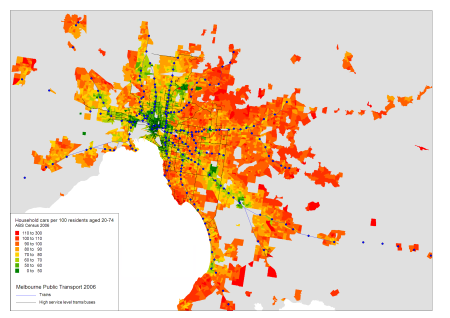 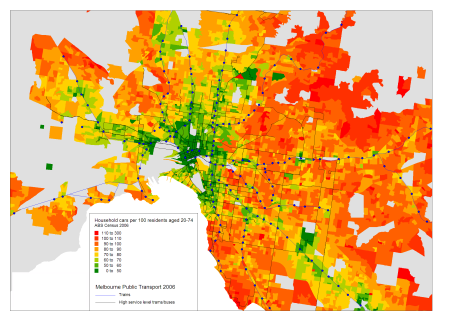 Note that this exercise does not aim to fully explain the reason for rates of car ownership in Melbourne. There is extensive literature available about this subject. We have primarily set out to highlight car ownership rates in Melbourne to inform debate.

This analysis was the subject a media story in The Age, in November 2009.

This entry was posted on Sunday, January 17th, 2010 at 6:53 pm and is filed under Car ownership, Melbourne, Urban Planning. You can follow any responses to this entry through the RSS 2.0 feed. You can leave a response, or trackback from your own site.

One Response to Car ownership and public transport