How much is Melbourne sprawling, and how much is urban consolidation happening?

This post sheds some light by looking at ABS population data and dwelling approval data.

Note that this analysis uses local government areas (LGAs) within the Melbourne Statistical Division (although with all of the Shire of Yarra Ranges), rather than the new Greater Melbourne Statistical Area.  ABS now publish annual population estimates at an SA2 level (essentially suburb level). I’ve had a look at this data and the trends are very similar to the results for LGAs, so I am continuing with LGAs for now in this post.

The first chart shows net annual population growth by regions of Melbourne. “outer-growth” refers to the designated growth LGAs on the fringe of Melbourne, namely Wyndham, Melton, Hume, Whittlesea, Casey and Cardinia (see the end of this post for definitions of regions and note that the areas have different sizes and starting populations). 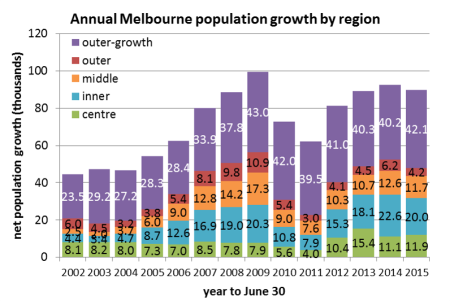 As you can see, Melbourne’s population growth accelerated in the years up to 2008-09, slowed down dramatically for a couple of years but has since bounced back to strong growth. The big slump in growth in 2010 and 2011 was largely a reduction in urban consolidation in established areas, while the outer-growth areas continued strongly.

The following chart shows how the growth was spread across Melbourne: 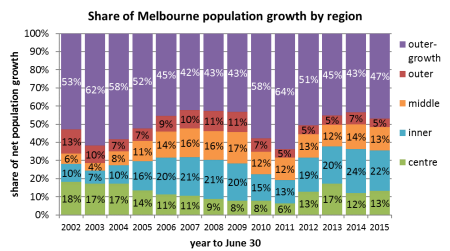 The following chart compares the estimated actual share of population growth in the outer-growth areas with the 2008, 2012 and 2014 Victorian Government’s “Victoria In Future” population projections (which DTPLI stresses are not targets or predictions).

If you’d like a more detailed idea about where changes in density is occurring see my posts showing changes in Melbourne density over time and a comparison of 2006 and 2011 at meshblock level.

The following chart shows the variations between the VIF 2008, 2012, and 2014, and estimated actual population for Melbourne:

The next charts shows the VIF2008 projected population growth 2007 to 2015, compared to the estimated actuals:

The VIF2014 projections for 2014-15 are much closer to the estimated actuals:

The next chart shows estimated actual annual population growth by region to 2014, along with VIF2014 projections for upcoming years:

Two readily available dwelling-based datasets are dwelling approvals (data available to a fine geography level) and dwelling completions (unfortunately these area estimates available at state level only). There will always be a time lag between approval and completion, and many approved dwellings don’t end up getting built. The ratio of dwelling completions to dwelling approvals in Victoria for the last 15 years is 92%. Comparing the two datasets for whole of Victoria, I found a 12 month offset provides the strongest correlation between approvals and completions:

Further complicating the analysis, the RBA has estimated that around 15% of dwelling approvals replace demolished dwellings, and around 8% are second homes or holiday homes.

There isn’t a strong correlation between Melbourne dwelling approvals and Melbourne population growth either, but for the purposes of this post I’ll look at dwelling building approvals because that is the only data I can get in any geographic detail.

The following chart shows a recent acceleration in dwelling approvals across Melbourne, with 55,303 new dwellings approved in 2014/15, more than double the 2007 figure.

Of particular interest are the recent surges in approvals in central, inner and middle Melbourne. The number of dwelling approvals in “inner” Melbourne almost match the outer growth areas in number. If these dwellings actually get built and occupied, then perhaps we will see a surge in population growth in established areas. 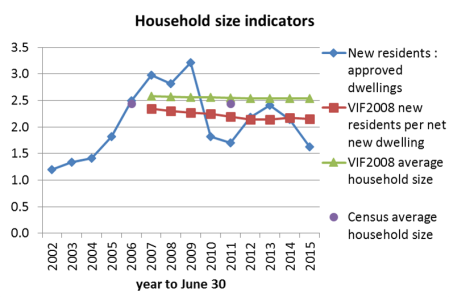 Curiously, the ratio of new residents to dwelling approvals was only 1.5 in the early parts of the decade, much lower than average household sizes. Does this reflect small dwelling sizes approved in those years, or maybe a large number of dwelling demolitions?

Melbourne doesn’t have population targets for different regions, but there was a target for dwellings growth in the (now defunct) Melbourne 2030 strategy. It stated the aim to:

The dashed red line is a straight line interpolation of the Melbourne 2030 target for greenfields dwelling share. The outer growth LGA’s share of dwelling approvals had been higher than the target until the end of 2012, but has fluctuated a fair bit.

The 2012 Victoria in Future projections had around 48% of net new dwellings in Melbourne occurring in the outer-growth areas between 2011 and 2026, far higher than the old Melbourne 2030 target of 22%.

In reality, we seem to be tracking much closer to the original Melbourne 2030 target.

(Note: The outer-growth LGAs’ share early in the 2000s was much lower. This may reflect urban growth that was still occurring in areas I have classified as “outer” as opposed to “outer-growth” before the Melbourne 2030 plan was released in 2002.)

I have allocated local government areas to regions as follows:

Middle = Brimbank, Manningham, Whitehorse, Monash, Kingston, Greater Dandenong (all but one in the east)

Here is a map of Melbourne with the regions shaded (dotted white area indicates within the 2006 urban growth boundary, sorry the colours don’t match exactly).

Here is a reference map for those unfamiliar with Melbourne LGAs. You’ll need to click to enlarge so you can read the text. 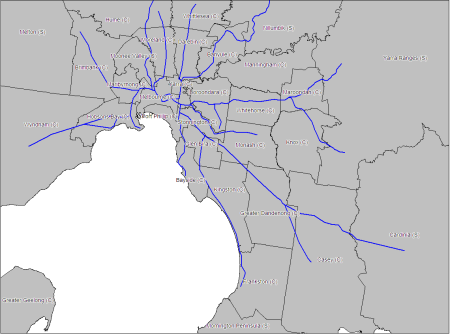 This entry was posted on Wednesday, April 4th, 2012 at 12:00 pm and is filed under Melbourne, Urban Planning. You can follow any responses to this entry through the RSS 2.0 feed. You can leave a response, or trackback from your own site.