What sorts of people use public transport? (part two)

Part one of this analysis looked at how geography, motor vehicle ownership, driver’s licence ownership related to the use of public transport.

This second post will look at how other personal circumstances relate to public transport, including age, a person’s main activity (occupation), income, employment and household type. Much of this is purely for interest, but I have uncovered a few interesting factors that relate to levels of public transport use.

Make sure you read part one first, so you know how I have gone about this analysis and can decode the terms and acronyms used.

The following chart shows very clearly that public transport use (which includes school bus use) peaked for teenagers and fell away with age: 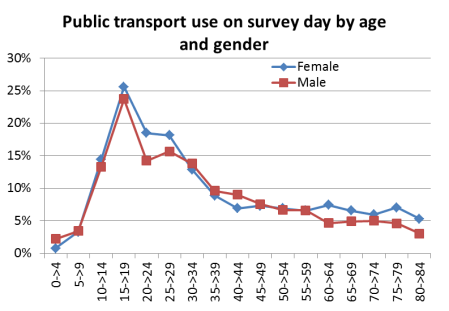 The chart debunks the myth that older people switch from cars to public transport as they give up driving. For males the trend in public transport use continued to decline with age, while females remained at around 7%.

Also of note is that young children had the lowest rates of public transport use of any age group. As you’ll see in a moment, they travelled a fair bit – just not on public transport.

So why are there these discrepancies for people in their 30s and 40s? I’ll get to that soon.

But first, is public transport use related to the amount of travel people make?

People aged 40-44 were the busiest travellers with 3.7 trips per day on average, which then fell with age. Between the ages of 20 and 44 people made many more trips, but became less likely to use public transport with age.

Young children do travel a fair bit, but rarely on public transport.

The average number of public transport trips per day peaked for teenagers, who also had the lowest overall trip making average.

The average number of active transport trips (walking and/or cycling only) did not seem to vary considerably by age.

The VISTA survey classifies people by their main activity in life (you might think of this as occupation). Here’s a look at average public transport use on school weekdays.

As we saw with age, public transport use peaked for secondary school children, with full time tertiary students not far behind. Children not yet at school were the least likely to use public transport, with those keeping house the next least likely.

Is that because of their driver’s licence and car ownership status? The following chart tests public transport use by main activity and groupings of licence and motor vehicle ownership (where I could get a cohort of 200 or more – missing values are not 0%).

So, motor vehicle ownership does not explain the low rate of public transport use by those “keeping house”. I’ll come back to that.

I expect the general explanation for the above chart is that public transport is more likely to be competitive to places of full time work or study, particularly those in the inner city. We know from a previous post that public transport use to suburban employment destinations is very low.

Here’s the picture for journeys to education in VISTA, by the location of education activity (note: cohort sizes down to 120 – a margin of error of 9%).

Very few primary school children took public transport to school (except in the regional centres), while 25-40% of suburban secondary and tertiary students used public transport. Public transport had a very high mode share in journeys to tertiary education in the inner city of Melbourne (where public transport works well and students probably cannot afford to park, even if they can drive a car).

What about trip making rates by main occupation? 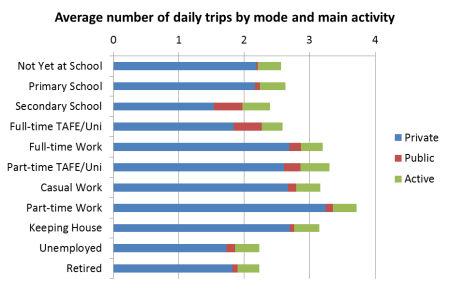 Part-time workers made the largest number of trips on average, while the unemployed and retired travelled the least. Those keeping house did a lot of travel, but very little of it on public transport.

No big surprises there when you think about it. Notice that part time work became much more common from the late 30s.

What impact does income have on public transport use?

I have used equivalised weekly household income per person as my measure, as this takes into account household size and the number of adults/children in those households. It essentially brings all households to the equivalent of a solo adult.

What’s driving this pattern? Well, we know that people on higher incomes are more likely to live closer to the city and probably work in the city centre, so what if I take geography out of the equation? The following chart looks at patterns within each home sub region and excludes people who travelled to or from the City of Melbourne (cohorts of less than 300 people not shown).

Well they certainly were much more likely to travel to/from the City of Melbourne. The shape of this chart is very similar to the chart showing overall public transport use by income, but the variation is much greater.

This suggests there may be a relationship between income and public transport use, though it is much less significant a determinant than whether or not someone travelled to the City of Melbourne.

But what about the other factors – like motor vehicle and licence ownership? In the following chart I’ve again limited myself to groupings where I could get a cohort of 200 or more (margin of error up to 7%). 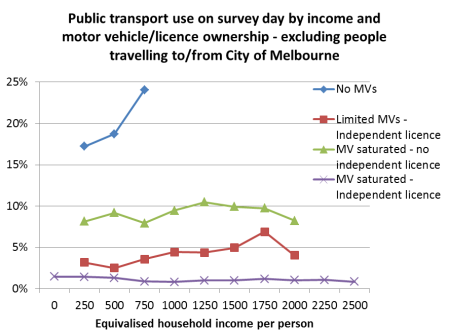 The pattern now looks like slightly increasing public transport use with income for some groups, when taking out motor vehicle/licence ownership (although the variation is within the margin of error so it might not be a significant pattern).

Might geography be at play here – that wealthier people live in areas with greater PT supply (ie closer to the city)? I cannot prove that because I cannot disaggregate this further.

Well, here is licence ownership by income (for adults): 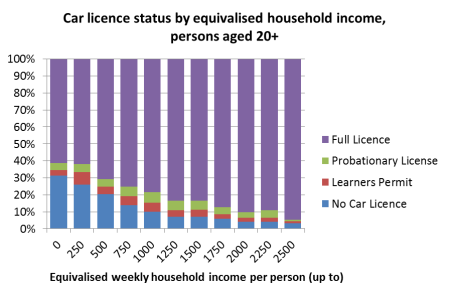 And here is motor vehicle ownership by income: 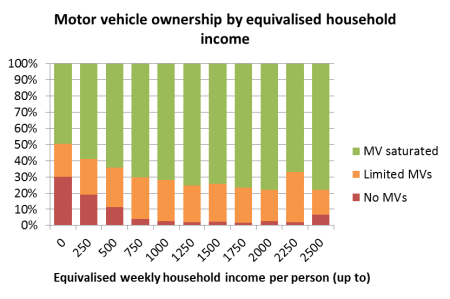 Licence ownership and motor vehicle ownership certainly increased with income, which you would expect to generally lead to lower public transport use.

Furthermore, people in higher income households travelled more often on average, which might increase their chance of using public transport: 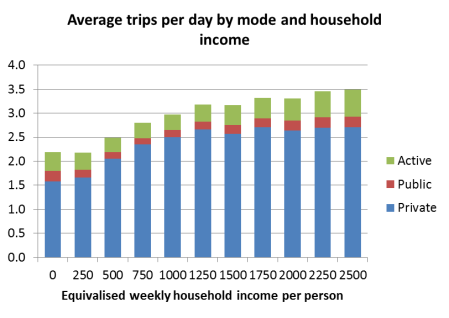 This leads me to conclude that income is very likely a driver of public transport use, and that people on higher incomes are less likely to use public transport, all other things being equal (though I haven’t tested for every other thing!). But the fact that people on higher incomes were more likely to travel to travel to/from the City of Melbourne trumped this income effect.

As we saw in a previous post, location of employment has the biggest bearing on public transport use. But here are a few breakdowns anyway (on weekday journey to work):

For comparison, here are the figures from the 2006 census for the whole of Victoria: 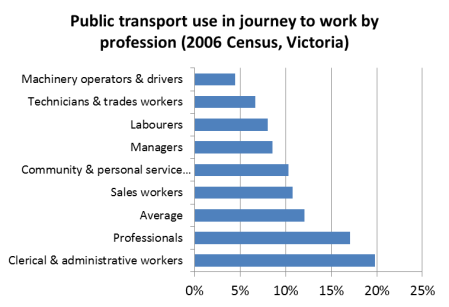 The margin of error on the VISTA data is around 4%, so they figures are reasonably similar.

And sure enough the jobs most prevalent in the inner city have the highest public transport mode share:

Managers are probably widely distributed across the sample area, and many would have packaged cars and/or parking as part of their salary packages.

Unfortunately the dataset is too small for me to disaggregate to people who don’t live or work in the City of Melbourne (in a previous post I found managers had lower rates of public transport use in the journey to work to the Melbourne CBD).

What about employment industry? 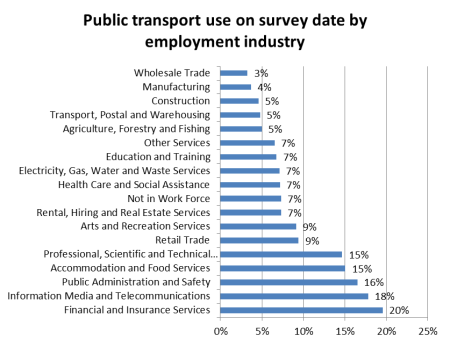 I suspect public transport use by employment industry will largely reflect employment location. Melbourne’s recent strong public transport growth could well relate to the changing mix of employment, with a move away from manufacturing and towards professional services. This might also be fuelling growth in CBD employment.

How does public transport use vary by household type? In some recent work I was looking at young families more closely, as they are a very common household type moving into growth areas on the fringes of our cities. I’ve defined a young family as being one or two parents with all children under 10 years of age.

The above chart is a blend of parents and children, so here’s public transport use by age and household type:

You can see between the ages of around 20 to 44 that parents (with children at home) had much lower rates of public transport use than other people. This suggests that becoming a parent is probably a major cause for people to abandon public transport. I suspect this may be because travelling with young children on public transport can be a challenge. But maybe they are also time poor (more on that shortly).

You can see here that children’s public transport use peaked at ages 15-19 and then fell with age. My cut-off for this chart was 400 persons in the cohort, and yes there were over 400 children aged 35-39 living with their parents in the sample.

Mums used public transport a lot less than dads, particularly younger mums. Perhaps this is because they made a lot more trips per day?

This result is consistent with the data showing that mums were much less likely to be working full time than dad. In fact over half were “keeping house” or working part time. Be careful of the subtle colour differences in the following chart: 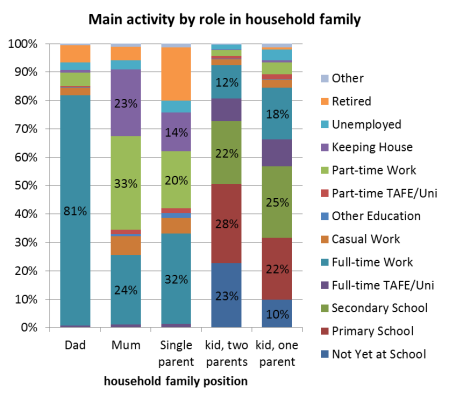 So does making more trips in a day reduce your chance of using public transport?

This chart excludes people who travel to/from the City of Melbourne (sorry about the mouthful of a chart title!). Having three or more trips in your day significantly reduced your chances of using public transport, but only really if you had limited household motor vehicle ownership. I’m guessing that the motor vehicles were more used by the people in the household who had to make more trips.

Curiously, a lot of single parents are retired. The data shows them to indeed be of retirement age – probably with adult children caring for them. They are probably not what you generally think of as single parent households, but technically that’s how they get classified.

So what are the strongest determinates of public transport use?

In my first post on this topic, the likely determinants of public transport use were:

Ideally I should run a logistic regression model to the data to analyse the drivers more systematically. I might see if I can do that in a part three.

This entry was posted on Sunday, June 24th, 2012 at 12:53 pm and is filed under Car ownership, Melbourne, Mode share. You can follow any responses to this entry through the RSS 2.0 feed. You can leave a response, or trackback from your own site.

3 Responses to What sorts of people use public transport? (part two)