Update on trends in Australian transport

This post charts some key Australian transport trends based on the latest available official data estimates as at January 2017 (including the Bureau of Infrastructure, Transport, and Regional Economics 2016 Yearbook).

Car use per capita has continued to decline in most Australian cities (the exceptions being Adelaide and Brisbane, but still well down on the peak of 2004): 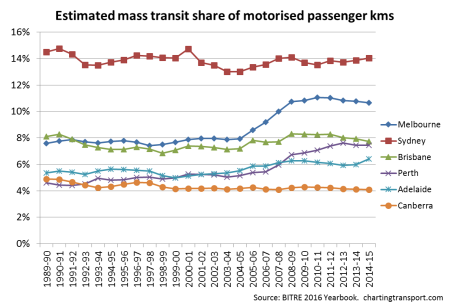 At the same time, estimated total vehicle kilometres in Australian cities has been increasing: 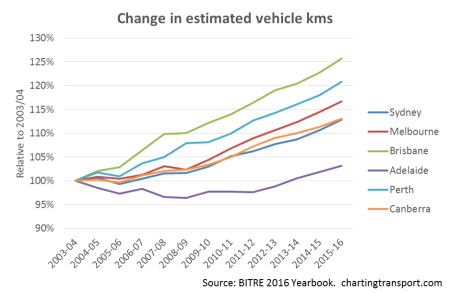 However, mass transit use has outpaced growth in car usage since 2003-04 across the five big cities: 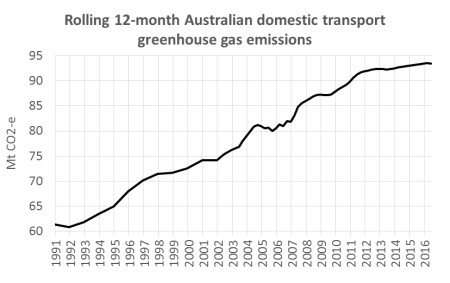 Here is driver licence ownership by age group for Australia:

(note: the rate is calculated as the sum of car, motorbike and truck licenses – including learner and probationary licences, divided by population. Some people have more than one driver’s licence so it’s not a perfect measure)

2015 saw a change in the trend on licence ownership rates for teenagers, with a slight increase after four years of decline. However the trends are quite different in each state: 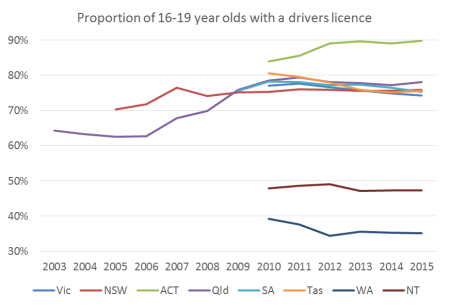 (note: in most states 16 is the age where people are able to obtain a learner’s permit)

I’m really not sure why Western Australia has such a low licence ownership rate compared to the other states (maybe the data doesn’t actually include learner permits).

I’ll aim to elaborate more on these trends in updates to subject-specific posts when I get time.

Are greenhouse gas emissions from transport still on the rise in Australia? Are vehicle fuel efficiency improvements making a difference?

This post takes a look at available emissions data.

The Department of Environment’s National Greenhouse Gas Inventory reports Australia’s emissions in great detail, and 1990 to 2013 data was available at the time of updating this post (there is usually more than a year’s lag before this data is released).

More recent but less detailed data is available in quarterly reports and here’s what the rolling 12 month trend looks like up to September 2014:

Emissions have grown by 50% since 1990, although a peak was experienced in the 12 months to December 2012 with a slight decline since then.

Transport was responsible for 17.2% of total Australian emissions in the year to September 2014 (excluding land use), an increase from around 15% in 2002.

Note that the above chart does not include electric rail emissions (see below), indirect emissions, or emissions from international shipping and aviation. Estimates for these are included in the following chart lifted from an 2008 ATRF paper by BITRE’s David Cosgrove. It shows this components add a lot on top (and the future projections are frightfully unsustainable). International transport emissions seem to sneak under the radar in the published figures.

The following chart shows Australian transport emissions per capita have been fairly flat at around 4 tonnes per person since around 2004: 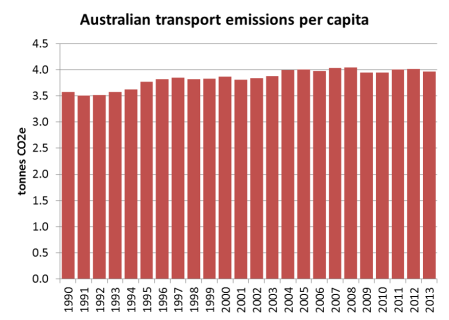 To put that in context, 4 tonnes per capita is just above Romania or Mexico’s total greenhouse gas emissions per capita (from all sectors, not just transport).

An aside on electric rail emissions

Transport is now Australia’s second largest emissions sector (after stationary energy), and transport has had the highest rate of emissions growth since 1990:

Within the transport sector, civil aviation has had by far the strongest growth since 1990 (but note this comes off a low 1990 base as airlines were recovering from the 1989 pilot’s strike). There’s been a lot of growth in light commercial vehicles, trucks and buses, and in more recent times, railways. Emissions from cars are continuing to grow, while domestic marine and motorcycle emissions have fallen (there appears to be a lot of fluctuation in the motorcycle estimates so I’m not sure I’d read too much into the movements).

The national inventory data allows us to see what is happening at a state level. Here is a chart of road emissions by state:

The quantities largely reflect the sizes of each state, but here are the growth trends since 1990:

Queensland and WA have grown the fastest by far, followed by New South Wales and Victoria.

The following charts remove the impact of population growth on trends by showing emissions per capita figures for each state. Some states appear to be declining while others appear relatively static.

Again, all states show a decline in recent years.

So is the drop in road transport emissions related to behaviour change and/or fuel/emissions efficiency?

The following chart shows that the average emissions per km of Australia cars was trending downwards until around 2007 but has since increased (I’ve used BITRE 2014 Yearbook data on car kms travelled hence a little noise):

Since 2007, car emissions per capita have been declining, but car emissions per kilometre have not – suggesting the reduction in emissions would be primarily due to changes in travel behaviour, not improvements in engine technology (or at least that improvements in engine technology are being cancelled out by us buying cars that are heavier and/or that have more energy intensive features).

What about transport emissions in cities?

The breakdowns are remarkably similar: 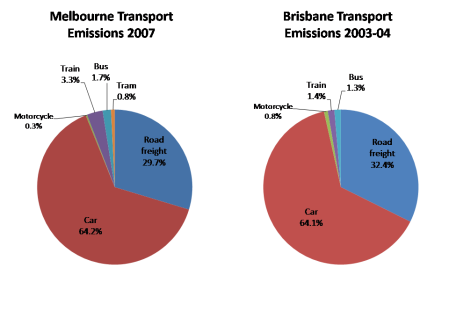 What does this look like per capita? I’ve also added London and Auckland figures (though I am not aware of the make up of the Auckland data) to create the following chart:

Obviously these cities’ transport systems and energy sources are very different, but it shows what is possible even for a large city like London. Transport emissions will closely follow transport energy use per capita, which has been the focus of a lot of research, particularly by Prof Peter Newman (eg his Garnaut Review submission).

For 1995 measures of passenger transport emissions per capita for other cities, see this wikipedia chart created using UITP Millenium Cities Database for 1995. Note: these figures only include passenger transport and hence are different to the above.

Also, here is some data for US cities from the Brookings Institute, but it excludes industry and non-highway transportation so is not comparable to the above chart.

Where are transport emissions headed?

Numerous projections of Australia’s domestic transport emissions have been made over recent years, as summarised by the following chart: 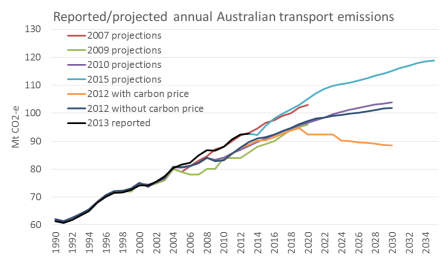 We appear to be tracking fairly closely to the 2007 projections. The 2010 projections anticipated a reduction in emissions per kilometre travelled, which has not eventuated, as we saw above.

The only projection that included a decline in transport emissions was a 2012 scenario including a carbon price, which has since been abandoned by the Abbott Government.

On Tuesday 20 March 2012 I gave this presentation to the Transport Economics Forum in Melbourne using material from this blog and some recently released data in BITRE’s Working Paper 127 on traffic growth in Australia. The presentation challenges some orthodox assumptions about transport trends in Australia and Melbourne.

When I get time, I hope to update existing posts to include the most recent data on (the lack of ) traffic growth.

A look at international transport emissions

How do Australia’s transport emissions compare with the rest of the world?

This post takes a high level look at some international data.

The most extensive data source appears to be from the International Energy Association, which includes 140 “countries” but uses slightly different estimation methodology to UNFCCC data.

The following chart shows the countries with the highest transport emissions per capita in 2007, from IEA report CO2 Emissions from Fuel Combustion 2009. 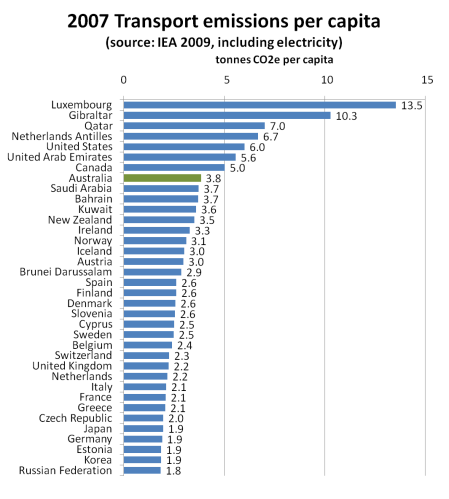 Note there is a very long tail on this chart, and my cut off point is arbitrary (Portugal and Oman aslo come in at 1.8). For the record, the Democratic Republic of Congo is at the bottom of the list with 0.009 tonnes per capita.

The top of the list includes many very small countries:

The following chart is for road transport, which is perhaps not as good a comparison given differences in rail and sea transport networks between countries:

The following charts use time series data from the UNFCCC for countries where both a 1990 and 2007 figure is available. 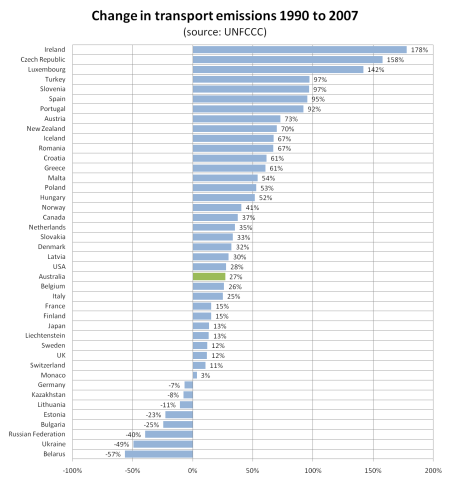 Many of the high growth countries are unexpected for me. The former states of the Soviet Union have shown large reductions in emissions.

So does being richer mean having higher transport emissions?

The following scatter graph shows transport emissions per capita and GDP per capita (2000 US dollars using purchasing power parity) for the countries in the IEA dataset: 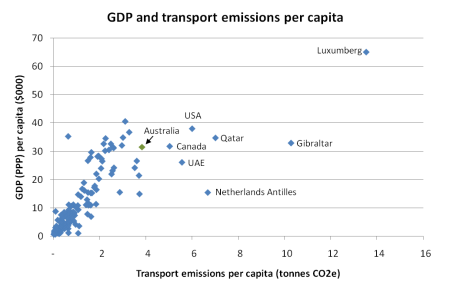 On visual inspection there appears to be a strong correlation with a few outliers (the Netherlands Antilles comes up again!).

The following chart cuts out the high outliers and zooms into the bottom left corner:

Some interesting patterns appear with regard to countries not in the “main correlation” (if you will):

Does this show countries that might be leaders at decoupling wealth from transport emissions?

Another look at this is the ratio of transport emissions to GDP (PPP):

Again a lot of oil states appear high in this list (Australia comes in at 121 g/$). Interestingly, the Congo appears high in the list – perhaps because it has such a small GDP. But I am not sure that too many more conclusions can be drawn from this data.

Finally, emissions from international aviation bunkers (that make up around 6% of global transport emissions) but are not included in country emissions figures:

Emissions from international marine bunkers make up around 9% of global transport emissions, according to the data.