Is the rate of car ownership still growing in Australia?

Firstly, by car ownership rate I mean the ratio of the number of registered “passenger vehicles” (from the ABS Motor Vehicle Census) to population (also from ABS). So while some of the measures in the post are not strictly for cars only, I’ve not worried too much about the distinction because I’m most interested in the trends.

The oldest motor vehicle census data is from 1955, and it is no surprise to see car ownership rates in Australia have risen considerably since then:

What is interesting in this chart is the relative rate of car ownership between states and territories. The Northern Territory is consistently the lowest – I’m guessing related to remote indigenous populations with low car ownership. New South Wales may reflect the relatively dense Sydney where car ownership is less important for many. I’m not sure of the reasons for other differences. It might be slight differences in reporting from the state agencies (see ABS’s explanatory notes).

But what about the most recent trends? Here is the same data from 2000 onwards (NT off the chart): 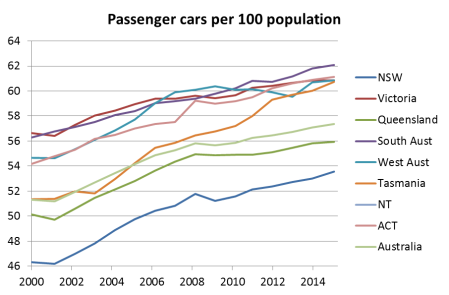 You can see growth across all states, although there are several periods where some states flat-lined, particularly around 2008.

What about car ownership in cities? 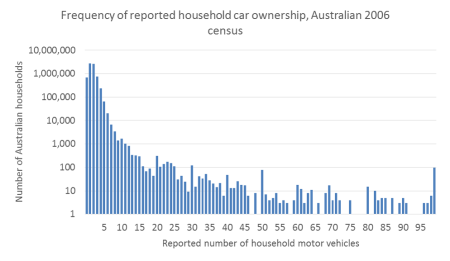 In 2011 census data ABS only report the number of households with “4 or more” motor vehicles. I’ve calculated the average number of cars for this category for 2006 for each city and applied that to the 2011 data to get total motor vehicle estimates for 2011.

The following chart shows household motor vehicle ownership rates for major city areas for 2006 and 2011 (boundaries changing slightly to include more peripheral areas that are likely to have higher car ownership):

Sydney has the lowest rate of motor vehicle ownership, and Perth the highest, with Melbourne showing the least growth.

Here is the relationship between car ownership and journey to work by car-only: 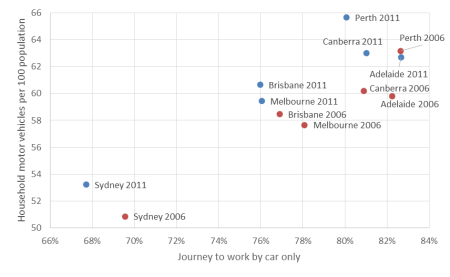 While all cities had an increase in car ownership between 2006 and 2011, all but two had a reduction in car-only mode share of journeys to work. They were Adelaide and Canberra which also had the largest increases in car ownership rates.

While cities overall show increasing ownership rates, there were reductions in motor vehicles per capita in many municipalities between 2006 and 2011, including the City of Perth, the City of Melbourne, the City of Adelaide, the City of Willoughby, and the City of North Sydney. This suggests car ownership is in decline in some inner city areas of Australian cities (more spatial detail for Melbourne is available in another post). These areas generally have good public transport and many local services within walking distance, and I’d guess many new residents are not bothering with car ownership.

The following chart compares motor vehicle ownership rates between capital city areas and the rest of each state or territory for 2011 census data:

Car ownership is certainly higher outside most capital cities – except in the Northern Territory as I suspected (curiously Darwin has around the same car ownership rate as Melbourne).

How does car ownership vary by demographics?

The Victorian Integrated Survey of Travel and Activity (VISTA) provides detailed data about households in Melbourne and regional Victorian cities for the years 2007-2009. So while I cannot extract trends, we can look at the patterns of car ownership rates.

I have classified all households in the VISTA dataset into one of three categories:

The following chart looks at household car ownership by household type, with “young families” classed as households where all children are under 10 years of age.

What about usage of each car?

Using data from the BITRE 2015 yearbook, it is possible to calculate estimated annual kms per passenger car. For this I’m comparing the number of vehicles at the motor vehicle census date with an estimate of total car kms in the previous 12 months (straight line interpolation of BITRE year ending June figures). This isn’t a perfect measure as the number of cars grows throughout the 12 month period where kilometres are taken, but it is still a guide to the trend.

Since around 2005, car ownership has continued to rise while car passenger kilometres per capita has fallen. This suggests we are driving cars shorter distances and/or less often.

Are more people owning motorcycles instead of cars? Here’s the long-term trend: 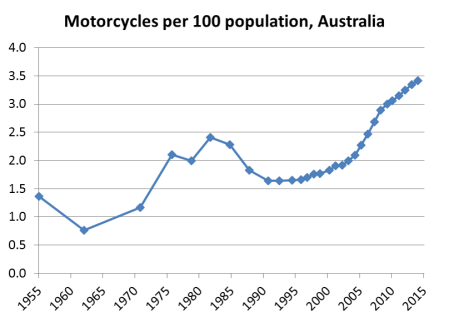 You can see motorcycle ownership rates peaked around 1980, dipped in the mid 1990s and have grown significantly since around 2004 (although still very small). Does it explain the slowdown in the car ownership rate from 2008? 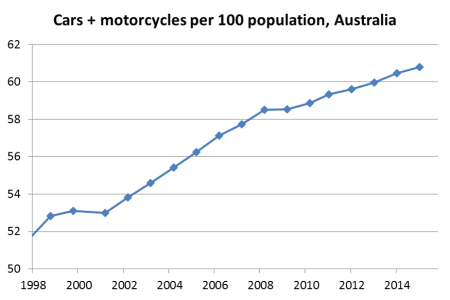 What about the ageing population?

Could the data be impacted by a changing age profile? We know that older aged people are less likely to have their driver’s license and are more likely to live in a household with lower car ownership (refer above), so maybe this would lead to a declining car ownership rate per head of population as a greater portion of the population is older.

Suppose most car owners are aged 18 to 80 years. Here’s the percentage of Australia’s population within that age band:

The share has been very steady at around 73 to 74% for all of the last 21 years, which suggests little impact on overall car ownership rates. Then again, those aged 80 today are more likely to have a driver’s license that those aged 80 in 1994. So the rate of car ownership of younger people has probably grown less. We know their rate of driver’s license ownership has declined over time, but I’m not aware of any readily available data that would confirm a lower rate of car ownership by younger people over time (it’s probably available from the Sydney Household Travel Survey datasets).

Notes on the data:

This entry was posted on Sunday, August 7th, 2011 at 11:53 pm and is filed under Australian Cities, Car ownership, Melbourne, Mode shift, Pricing. You can follow any responses to this entry through the RSS 2.0 feed. You can leave a response, or trackback from your own site.

5 Responses to Trends in car ownership